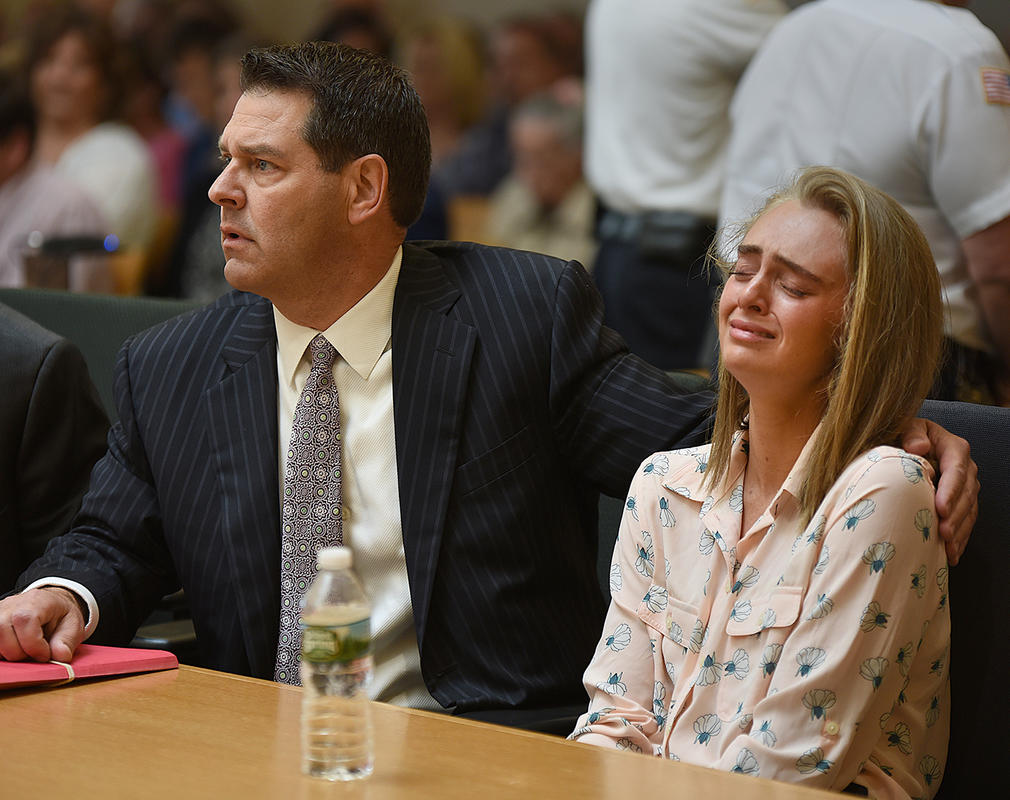 Michelle Carter reacts as she listens to Judge Lawrence Moniz before he announces his verdict on Friday, 6/16/17. Her attorney Joseph Cataldo is seated next to her. She was found guilty of involuntary manslaughter in the suicide of Conrad Roy III. Photo by Glenn Silva/Fairhaven Neighborhood News/POOL

There is no argument that Michelle Carter urged her 18 year old boyfriend, Conrad Roy III, to commit suicide. But some are asking if psychiatric drugs were responsible for her uncaring attitude towards Conrad.
On the surface, the facts are agonizingly clear; a young woman actually encouraged her disturbed young boyfriend to kill himself. The details are horrific; at one point Conrad, who had connected his truck to a water pump (which released carbon monoxide) opened the truck door and got out before he was overcome by the fumes. Apparently he was ready to abort his suicide attempt. But Michelle told him to get back into the poisonous environment. Tragically, he obeyed her.
His body was found the next day.[i]
Obviously, this was an evil act on the part of Ms. Carter. Without delving into the woman’s background, one could merely assume she herself was “bad.” In a world before psychiatric drug prevalence, there would be no other explanation.
But unfortunately, that world is in the past, and psychiatric drugs are being increasingly scrutinized for terrible side effects, both physical and emotional.
Psychiatric Drugs and Behavior
Psychiatric drugs have been proven time and again to influence behavior negatively.
In this case, Carter took Prozac in 2011 for eight months. She was only 14 at the time. The dosage was reduced then halted. But later, she was back on the drug. In April 2014 she was prescribed Celexa, a selective serotonin reuptake inhibitor (SSRI) drug. [ii]
According to the National Center for Biotechnology Information (NCBI) “selective serotonin reuptake inhibitor exposure has been occasionally associated with both behavioral apathy and emotional blunting.”
The report also refers to “… a number of distinct emotional themes in affected patients, including a general reduction in the intensity or experience of all emotions, both positive and negative; a sense of emotional detachment; “just not caring…” [iii]
It doesn’t take much creative thought to see that a person blunted emotionally by psychiatric drugs such as Celexa could cause harm to someone they were close to. The tragedy of Conrad’s suicide, as encouraged by Carter, is a case in point.
On the other side, Conrad himself may have been subject to psychiatric drug influence with suicidal side effects.
The Real Murderer
Michelle Carter may go to jail for involuntary manslaughter, but the real culprit, the psychiatrist, is free to continue dispensing his mood-altering and dangerous drugs.
According to the American Psychological Association, “The use of psychotropic drugs by adult Americans increased 22 percent from 2001 to 2010, with one in five adults now taking at least one psychotropic medication, according to industry data. In 2010, Americans spent more than $16 billion on antipsychotics, $11 billion on antidepressants and $7 billion for drugs to treat attention-deficit hyperactivity disorder (ADHD). The rapid growth of all three classes of drugs has alarmed some mental health professionals, who are concerned about the use of powerful antipsychotic drugs by elderly nursing home residents and the prescription of stimulants to children who may have been misdiagnosed with ADHD.” [iv]
Tragedies like the suicide of Conrad Roy III can be averted with parental education. Basing the mental health of one’s son or daughter on the flawed treatment of psychiatry is playing Russian roulette with that child’s future, sanity and life.