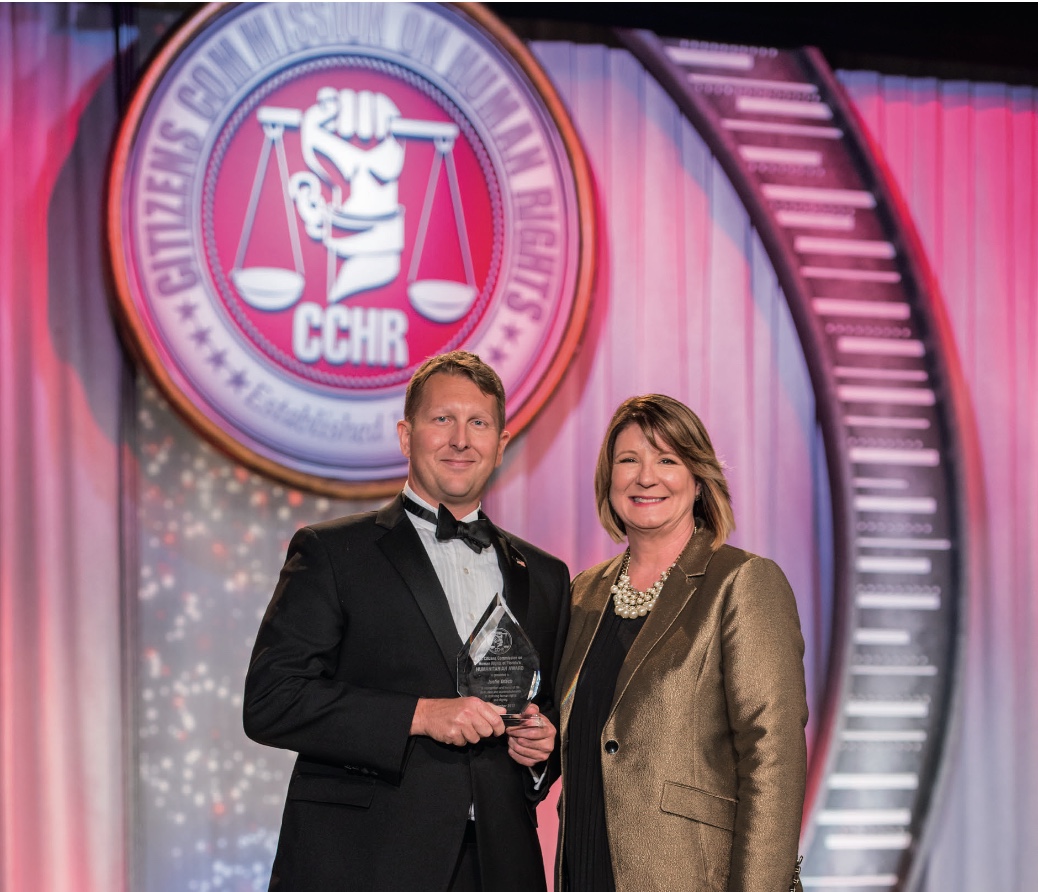 A prominent Florida attorney was presented with the CCHR Humanitarian Award during a banquet held at the historic Fort Harrison in downtown Clearwater for his work to expose and prevent fraudulent involuntary psychiatric examinations known as Baker Acts.
Hundreds of guests attended the 2nd Annual Citizens Commission on Human Rights (CCHR) Humanitarian Awards Banquet for the purpose of honoring the many dedicated volunteers and supporters of CCHR for their work in the field of mental health reform.
The guest of honor, and recipient of the 2017 CCHR Humanitarian Award, was Jacksonville attorney Mr. Justin Seth Drach for his work to end unlawful Baker Acting of men, woman and children in Florida.
In accepting the award, Mr. Drach said, “Today, in Florida, one of the greatest evils is fraudulent Baker Acts. I make no bones about it, there is an epidemic of greed and abuse in medicine, especially the treatment of mental illness.”
While the original intent of the Baker Act was to ensure patient rights and prevent abuse, the Annual Report of Baker Act Data, revealed in March that in the 15 years from 2001 to 2016, involuntary examinations more than doubled, a 105.50% increase, and that 32,475 of these initiations were on children. Even more disturbing is that the mental health law allows for a child to be Baker Acted without parental knowledge.
Spearheading a campaign at the beginning of 2016 to put an end to this violation of parental rights, CCHR Florida, a non-profit mental health watchdog working to expose human rights violations in the field of mental health and dedicated to the protection of children, has worked to educate families on their rights under the law at hundreds of community events reaching almost 150,000 families in the Tampa Bay area in addition to calling upon Florida lawmakers to eliminate the unjust Baker Acting of children.
“It should not be legal for a child to be taken into custody and sent for involuntary psychiatric examination without parental knowledge when the child does not meet the criteria for a Baker Act, yet this is what is happening in Florida,” said Diane Stein, President CCHR Florida.
Stating that Florida is a target-rich environment for corporations looking to squeeze profits from filled beds and that the mental health act is weak, Mr. Drach called upon those in attendance to empathize with the mother, father, son, or daughter who has been locked behind steel doors because they have good insurance, or because the state of Florida will subsidize their bed and asked them to contribute to the legacy of putting an end to the atrocities of mental health abuse.
For more information on CCHR’s campaign to eliminate inappropriate Baker Acting of children please visit 5 Simple Steps to Help Protect Your Child, or contact CCHR at 727-442-8820 or visit the center at 109 N. Fort Harrison Ave in Clearwater, Florida.