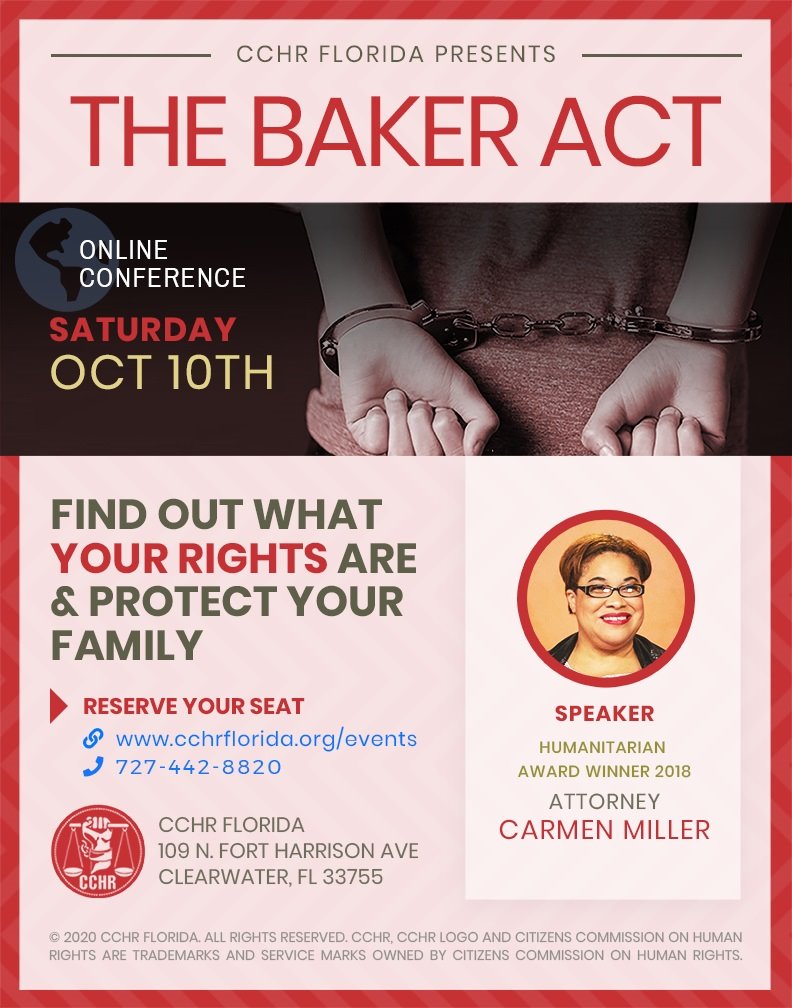 During a meeting of the Children’s Baker Act Task Force, it was revealed that a significant number of children sent for an involuntary psychiatric examination did not meet the criteria to be taken into custody. Unfortunately, this is not new information. The mental health watchdog, the Citizens Commission on Human Rights (CCHR), has been reporting on this alarming trend for years and as part of a campaign to end abusive use of this law, CCHR engages in numerous public information activities including seminars and workshops delivered virtually and at the headquarters in downtown Clearwater, Florida. [1]

The next complimentary seminar is a virtual presentation scheduled for World Mental Health Day on October 10th from 11:30am until 12:30pm.

Spurred into action by countless reports of abusive Baker Acting, CCHR launched a campaign in 2015 to educate families, lawmakers, law enforcement and school districts on mental health rights and in 2019 expanded this campaign to include parental rights in the area of mental health. Since campaign launch, over half a million people have been educated on their rights.

Seeing a need for professional advice, CCHR began hosting seminars delivered by professionals on the mental health law, parental rights, psychiatric drug side effects and more. With the recent change in how public events can be held due to restriction put in place in response to COVD-19, CCHR now holds these events virtually.

The virtual seminar scheduled on October 10th for World Mental Health Day features attorney Carmen Miller, a former assistant public defender in the Thirteenth Circuit in Tampa, with an extensive background in dealing with Baker Acts. Those in attendance will learn the basics of the law and what rights they have in a Baker Act situation.

“The original stated intention of the Baker Act was to protect the rights of citizens sent for involuntary psychiatric examination but it has become a source of great abuse,” stated the president for the CCHR chapter in Florida, Diane Stein. “For this reason, CCHR is on a mission to not only educate people on their rights but to end the abuse.”

To learn more or to reserve a spot for this complimentary virtual seminar, please call 727-442-8820.

← Almost 410,000 Reached in a Campaign to Protect Children and Parental Rights Tens of Thousands of Children Sent for Involuntary Psychiatric Examination in Florida →