Unconscious Bias – A Step Toward a Thought Police Society 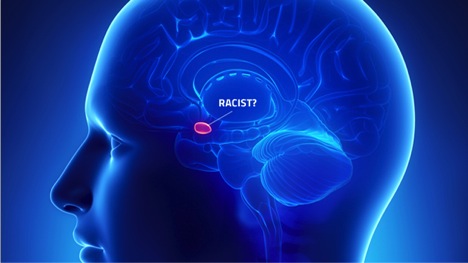 Neurologists claim your biases are located in an exact part of the brain called the amygdala. Photo Credit: The amygdala CLIPAREA/Shutterstock

For many years the concept of “Unconscious Bias” (sometimes called “Implicit Bias”) had been bubbling into society from the research labs of psychologists, social scientists and neurologists.
Its techniques and trainings have been implemented by governments, corporations, schools, law enforcement agencies and judicial systems who often blindly trust the procedures cooked up by psychology and psychiatry to be “scientific truth.”
Hillary Clinton has a “gender bias” component in her 2016 Presidential campaign.
Eric Holder, when still Attorney General of the United States, examined the question of racial bias in the Ferguson, Mo. police department and made this statement.
“Our view of the evidence found no alternative explanation for the disproportionate impact on African- American residents other than implicit and explicit racial bias.”
James Comey, head of the FBI, had this to say, “Much research points to the widespread existence of unconscious bias. Many people in our white-majority culture have unconscious racial biases and react differently to a white face than a black face. In fact, we all, white and black, carry various biases around with us.”
Here at the University of South Florida, Associate Professor of Criminology Lorie Fridell is a nationally recognized expert on helping police to overcome implicit bias. She claims “implicit biases manifest in even the best intentioned individual.” She runs the “Fair and Impartial Policing” program under the Dept. of Justice Community Oriented Policing Service (COPS).
The Boston Globe offered an important disclaimer about her program: “she has never produced any empirical results to show that her methods actually reduce discriminatory policing. (In Fridell’s view, this goes with the territory: There’s no way to accurately measure biased policing, because it’s impossible to look at the actions of an individual police officer and know for sure whether it was influenced by bias or not.)”
Police from all over the US have been taking various courses to handle their unconscious racial bias.
Out in Los Angeles the Simon Wiesenthal Center runs the Museum of Tolerance which focuses on the history of the Holocaust. It has expanded its role to presenting facts about racism in America. It now offers a program for police to explore their unconscious biases. It is called Tools for Tolerance.
Officers arrive and are faced with a choice between entering a door marked “prejudiced” and another marked “unprejudiced.” Those who try to enter via the “unprejudiced” discover it is locked – a reminder that in their unconscious mind everyone is prejudiced.
Not all researchers are buying the value of this training citing the lack of evidence that the training works and stating that the effects are short lived.
Joshua Correll, a social psychologist and associate professor at the University of Colorado at Boulder says that in the real world of policing it could potentially endanger officers or the public by making officers slower to recognize threats for fear of being called biased, and that the training’s benefits could quickly disappear when an officer resumes his work back home.
In another example of forced unconscious bias training the US Forest Service Management Director Bryan Rice had his workers take an online unproven test called Project Implicit. Instructions for the online test specifically warn of problems when it is taken “outside of the safeguards of a research institution.” Users also are told to be careful about how far to go in interpreting the results as the tests can pull to view and leave unhandled old painful emotional experiences.
A senior congressional aide thought the Forest Service has bigger things to worry about.
“At some point this year, thousands of Americans will have to flee their homes because of catastrophic wildfires caused by poorly managed Forest Service lands,” the aide said. “And when some of those people return to smoldering piles that were once their homes, they will be comforted that under this administration, the Forest Service has been vigilant in testing against unconscious biases.”
So, what is the “Scientific Basis” for Unconscious Bias?
Neurologists claim your biases are located in an exact part of the brain called the amygdala.

“The amygdala is a small structure in the medial temporal lobe of the brain that is known for its role in race-related mental processes as well as responding to threat and fear.”
How is this known?
“By the amygdala’s response to various stimuli such as African American and Caucasian faces or skin tone variations”
How do these researchers get the amygdala to respond?
By using stimulus-response reminiscent of Pavlov’s dog and the mind control work of psychiatry. Throw some upsetting pictures in front of a research volunteer and see if some reaction can be obtained.
Of course, the next level of neurological research was to see what happened to the subject’s implicit bias when he was given a drug!
The authors of that study hypothesized that propranolol, which is a beta-adrenoceptor blocker, should reduce implicit racial bias because beta-adrenoceptor receptors are known to have an effect on emotional perception and memory.
Propranodol is a prescription drug for high blood pressure, chest pains, irregular heartbeat, migraines and tremors.
It has this impressive list of possible side effects – all potentially deadly for a policeman.

The authors found Propranodol effectively reduced unconscious bias.
It won’t be long before some researcher asks if an anti-depressant drug might lengthen the time that we can re-program the person to be good and not act out his unconscious biases against women, gays, African-Americans or whatever is decided to be the next “thought crime” against society.
Thoughts are not actions and our legal system is based on justice regarding the actions taken by a person, not his thoughts.
Even New York University neuroscientist David Amodio, an expert on the psychology of intergroup bias, knows that these attempts to probe peoples minds with these tests are unworkable.
“The human mind is extremely adept at control and regulation,” Amodio says, “and the fact that we have these biases should really be seen as an opportunity for us to be aware and do something about them.”
That’s why, in the end, Amodio doesn’t think that the mere existence of implicit biases provides any excuse for the display of overt or explicit racism. After all, stereotypes are ubiquitous. We all perceive them in our culture, but we do not all act upon them. In other words, we have the ability—and the responsibility—to regulate our own behavior.
“I don’t really think humans have any good excuses for acting on their automatic biases,” says Amodio.
A drug or a shock machine can change people’s thoughts but never to the betterment of the person or our society.
SOURCES:
http://www.infowars.com/unconscious-bias-or-political-correctness-on-steroids/
http://www.washingtontimes.com/news/2015/mar/19/forest-service-workers-told-to-test-own-unconsciou/?page=all
http://www.bostonglobe.com/ideas/2014/09/20/the-bias-fighters/lTZh1WyzG2sG5CmXoh8dRP/story.html
http://kirwaninstitute.osu.edu/wp-content/uploads/2014/03/2014-implicit-bias.pdf
http://www.motherjones.com/environment/2014/05/inquiring-minds-david-amodio-your-brain-on-racism