Something Worse than Electroshock Therapy? 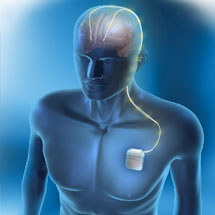 When psychiatric drugs and electroconvulsive therapy fail to relieve a patient’s depression, psychiatrists report he has “treatment-resistant depression”.
This patient is then a prime candidate for any experimental lunacy that the profession dreams up because the poor victim feels he has nothing to lose. The earlier treatments have left him more depressed and suicidal than he was before he first met a psychiatrist. He’ll try anything no matter how bizarre.
As we have reported earlier, lobbyists are pushing for a Senate vote this coming week on a bill called “The 21st Century Cures Act” – or HR 34 in its newly “amended” form. The law calls for skipping scientifically sound safety testing of new medical devices in the guise of helping desperate cases, but it would result in harmful and potentially deadly new gadgets being rolled out for use on the general population.
If passed and signed into law, ECT shock machines could become as commonly available and used as electric wheelchairs.
Ready in the wings if this bill passes into law is an equally destructive medical device and procedure called “Deep Brain Stimulation” (DBS) – touted as the perfect new salvation for “treatment-resistant depression.”
A Vancouver based freelance journalist named Danielle Egan explored the chilling story of DBS in detail in her article “Adverse Effects: The Perils of Deep Brain Stimulation for Depression”.[1]
Deep Brain Stimulation begins with two surgeries.
The first surgery takes an entire day. It begins by bolting a frame to the patient’s head so the surgeon can locate the target area of the brain.
Then, two holes are drilled through the bone of the skull so that wires and electrical contacts can be positioned deep in each hemisphere of the brain.  The wires are then tunneled back through the brain, under the skin of the scalp, behind the ears and down the neck into the chest.
In the second surgery, an internal pulse generator is installed under the skin (a so-called brain “pacemaker”) that delivers electricity via the wires to the brain implant. The specific voltage for each of the eight electrode contacts are set by an external remote control computer programming device, the settings of which are controlled by a medical specialist.
When “turned on” the battery continuously delivers electricity into the targeted part of the brain. The battery might go dead in as little as 10 months requiring another chest surgery to change batteries.
Is there any proven medical science supporting this activity?
DBS targets an almond-sized part of the cerebral cortex “thought” to be implicated in depression.[2]
Ms. Egan discovered “Proponents of DBS still have no idea about why DBS might provide a benefit, or its possible ‘therapeutic’ mechanism of action, even though it has been researched since the ‘80s.”
The idea of the effect created by DBS is similar to the cognitive blunting that victims of lobotomies experienced back in the 1940s. Psychosurgery, the idea of deliberately destroying brain tissue, fell out of favor for awhile but resurged in the 1990s. The medical centers where this theory has risen are the current proponents of DBS and they implant the electrical brain devices in the same parts of the brain formerly targeted by psychosurgery.
Dangers of Deep Brain Stimulation
DBS surgery comes with a host of potential surgical risks, including: