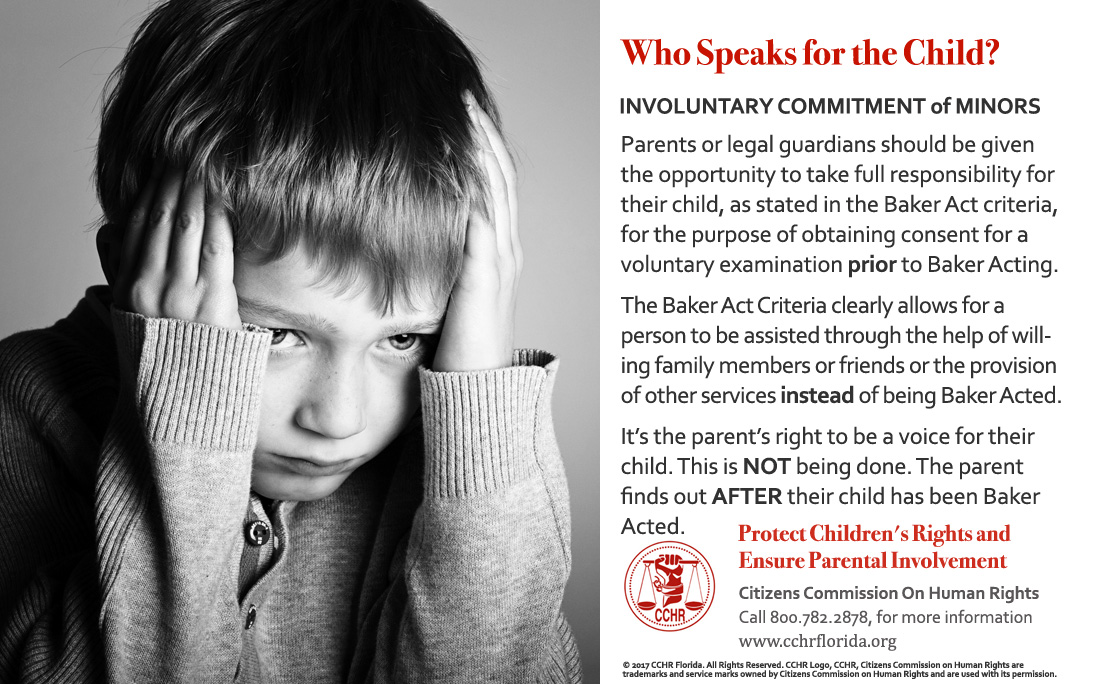 Seen as a statewide crisis, 32,763 involuntary examinations were initiated on children during 2016-2017 according to a report recently released by the Baker Act Reporting Center.

The Citizens Commission on Human Rights (CCHR), a non-profit mental health watchdog dedicated to the protection of children, has reached over 184,000 families in a campaign to stop the illegal Baker Acting of children in Florida.
The Florida chapter of CCHR is on a crusade to prevent unjust involuntary psychiatric examination of children without parental knowledge. Educating families on their rights at hundreds of local events, CCHR also hosts free seminars delivered by a local attorney on the mental health law at their headquarters located in downtown Clearwater.
The mental health law in Florida, commonly known as the Baker Act, allows for the initiation of an involuntary psychiatric examination of anyone no matter their age and this includes children as young as two years of age.
“We receive calls on a weekly basis from the parents of children that have been Baker Acted without their knowledge,” said Diane Stein, President of CCHR Florida. “This is a violation of the rights of the child and the parent.”
Seen as a statewide crisis, 32,763 involuntary examinations were initiated on children during 2016-2017 according to a report recently released by the Baker Act Reporting Center. [1]
Taking action to stop this abuse, CCHR began educating families on their rights in 2016 and has reached over 184,000 families with information on the Baker Act as well as providing them with a form designed to help prevent unjust involuntary examination. The form, created by attorneys, makes it clear that the parent is not relinquishing their parental rights and also clearly states that the parent is not giving permission for a psychiatric examination of their child for any purpose. This statement is based on Chapter 394.463 of the Florida Statutes, which reads as follows: “Without care or treatment, the person is likely to suffer from neglect or refuse to care for himself or herself; such neglect or refusal poses a real and present threat of substantial harm to his or her well-being; and it is not apparent that such harm may be avoided through the help of willing family members or friends or the provision of other services.”
“The criteria for involuntary examination clearly allows for a parent or legal guardian to be given the opportunity to care for their child yet this fundamental right is being stripped away,” said Stein.
Concerned parents are encouraged to contact CCHR to learn more about their rights under the law at 800-782-2878 and to sign a petition asking Florida lawmakers to amend the Baker Act.
Source:
[1] Fiscal Year 2016/2017 Annual Report http://www.dcf.state.fl.us/programs/samh/publications/The%20Baker%20Act%20-%20FL%20MH%20Act%20-%20FY%2016-17%20Annual%20Report%20-%20Released%20June%202018.pdf