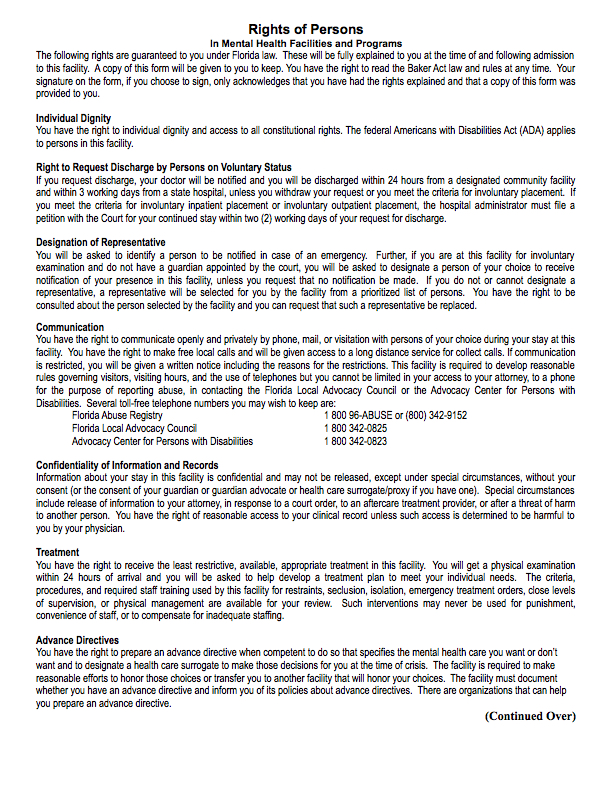 In the simplest terms, the individual who has been involuntarily committed, (as in the Florida Baker Act), has rights and the family members and even the friends have rights. See Q & A for specifics on those rights, including this Rights of Patients Form, which is supposed to be given to the individual and all those close to the individual.

Jim Gottstein, Attorney and President of the non-profit, “Psychiatric Rights”, has devoted the bulk of his time pro bono to mounting a strategic litigation campaign against forced psychiatric drugging and electroshock across the United States. In a very informative article, on involuntary commitment, Mr. Gottstein, cites several legal cases in an effort to inform the public what their rights are in regards to who is committed and what their rights are in terms of forced psychiatric drugging while committed.

Mr. Gottstein writes “The United States Supreme Court case of Foucha v. Louisiana, 504 U.S. 71 (1992) held that ‘The State may [in addition to punishment for a crime] also confine a mentally ill person if it shows ‘by clear and convincing evidence that the individual is mentally ill and dangerous.”  (emphasis added)  In the recent case of Kansas v. Crane, 122 S.Ct. 867 (2002), the US Supreme Court reiterated:

‘[w]e have consistently upheld such involuntary commitment statutes’ when (1) ‘the confinement takes place pursuant to proper procedures and evidentiary standards,’ (2) there is a finding of ‘dangerousness either to one’s self or to others,’ and (3) proof of dangerousness is ‘coupled … with the proof of some additional factor, such as a ‘mental illness’ or ‘mental abnormality.’ ‘

With respect to the gravely disabled concept, in O’Connor v. Donaldson, 422 U.S. 563, 575–76 (1975), the United States Supreme Court has suggested that inability to take care of oneself cannot be considered a sufficient finding of dangerousness unless survival is at stake: ‘a State cannot constitutionally confine without more a nondangerous individual who is capable of surviving safely in freedom by himself or with the help of willing and responsible family members or friends.’

Too often, people of every age, contact our hotline and relay stories of what preceded their involuntary commitment or their loved one’s commitment. What is prevalent, in approximately 25% of all people who call, in a year, is that there is not clear evidence that they ever fit the criteria of the Baker Act/Involuntary Commitment.

In and amongst these hundreds of stories, are real people, aged 5years to elderly, who have been ripped out of the environment that they live, study and/or work in, and placed in a locked-down psychiatric ward, regardless of their age. No matter the age, nor the circumstances behind the person’s commitment, each individual has the right to decline treatment, per Informed Consent

The exception to this, is when the person meets the criteria for an “Emergency Treatment Order”, defined in this way: “The person must be demonstrating an inability to exercise voluntary control over his or her own symptomatic behavior and that these uncontrolled symptoms and behavior are an imminent danger to the person or to others in the facility”. 1

The following is what Mr. Gottstein included in his article on this aspect of involuntary commitment.

First, a court must find that important governmental interests are at stake.

Second, the court must conclude that involuntary medication will significantly further those concomitant state interests.

Third, the court must conclude that involuntary medication is necessary to further those interests. The court must find that any alternative, less intrusive treatments are unlikely to achieve substantially the same results.

Fourth, as we have said, the court must conclude that administration of the drugs is medically appropriate, i.e., in the patient’s best medical interest in light of his medical condition. The specific kinds of drugs at issue may matter here as elsewhere… ‘

While Sell is a competence to stand trial case, it is hard to see how a person facing forced drugging in the context of civil commitment has fewer rights.”

by James B. Gottstein, Esq. Psychiatry: Force of Law

When a law affects a constitutionally protected interest, the law must meet the Rational Basis Test. This test requires that the law be rationally related to a legitimate state interest. For example, a state law that prohibits a person from selling insurance without a license deprives people of their right to make contracts freely. Yet the law will be upheld because it is a rational means of advancing the state interest in protecting persons from fraudulent or unscrupulous insurance agents. Most laws that are challenged on this basis are upheld, as there is usually some type of reasonable relation between the state interest and the way the law seeks to advance that interest. West’s Encyclopedia of American Law, edition 2. Copyright 2008