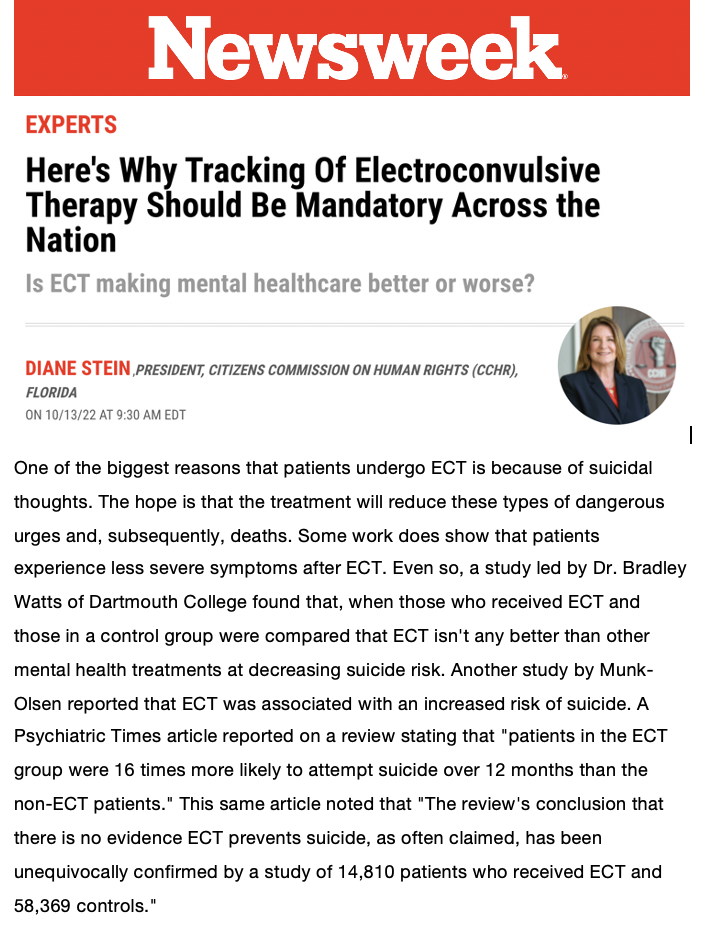 Electroconvulsive therapy sends electricity through the brain. The voltage can be as high as 460, and the current causes a surge of electrical activity, resulting in a seizure.

ECT got its start in 1934 when psychiatrist Ladislas Meduna, having recognized that epilepsy patients seemed to improve after seizures, began using the stimulant Metrazol to induce seizures in psychotic patients. The violent seizures and terror induced by the drug were excruciating. In search of an alternative method, neurologist Ugo Cerletti and his colleague, Lucio Bini, developed the first ECT device in 1938 after observing how electric shock was used in slaughterhouses before killing pigs.

Those recommended as candidates for ECT include not only individuals with severe depression who haven’t responded to other treatments but also individuals with disorders such as schizophrenia. However, the recent revelation that the chemical imbalance theory could be false and that low serotonin levels are not necessarily the cause of depression brings the entire concept of treatment-resistant depression into question.

Defenders assert that advances in ECT techniques, such as individualized dosing and the use of muscle relaxants, make ECT safer and more capable of better results than in the past.

However, mental health human rights advocates point to the lack of any clinical trials involving people, which is normally required by the FDA when determining the safety of a device; this fact, combined with the potential for harm, makes it a controversial mental health treatment option.

READ THE FULL ARTICLE ON NEWSWEEK

← Human Rights Expert: Why Everyone Should Care About Coercive Psychiatry CCHR Florida Takes Home the Platinum Award for Government Relations in Campaign to Protect Children →