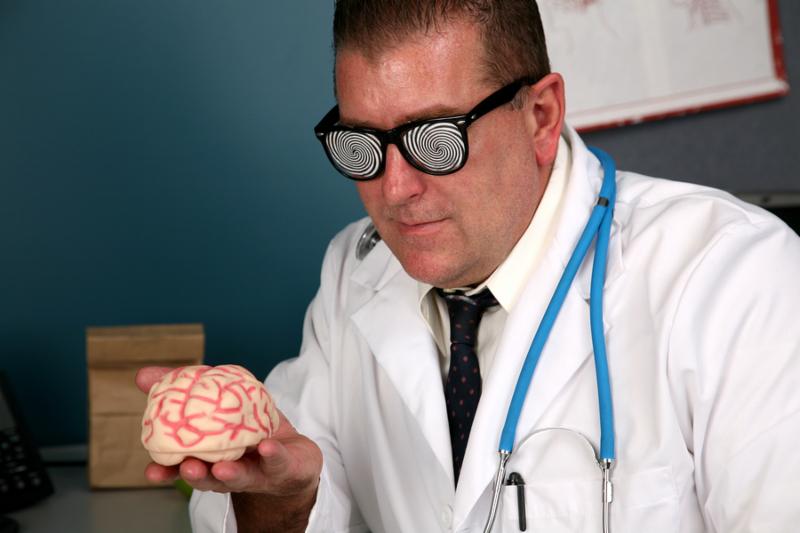 Lobotomy, the brutal amputation and mangling of brain tissue, still has a place in modern psychiatry.
The rampant public outcry against this practice as typified by Dr. Walter Freeman in the mid 20th century (some likened Freeman’s brutal operations as having a “theatrical” approach) may have blown over. But psychiatry still has an obsession with treating the brain as a switchboard to be tinkered with.
Dr. Freeman was notorious for lobotomizing over 2,000 American veterans of WWII. This barbaric procedure was approved by two Veteran’s Administration doctors. In their words, the lobotomy “may be done, in suitable cases, under local anesthesia,” and …“does not demand a high degree of surgical skill.”
Freeman advanced his procedure from cutting open the skull and slicing through neural fibers in the brain, to hammering ice-pick like tools through patients’ eye sockets. This latter procedure was apparently developed so doctors untrained in surgery could still perform lobotomies.
New Psychiatric Surgical Techniques
Oddly enough, although modern psychiatrists and psychologists admit there is no cure for what they consider to be “mental disorders,” they have not ceased their attempts at controlling behavior through brain surgery.
They make grandiose statements like “The most noteworthy progress in psychosurgery in recent years has been the combination of a more rigorous selection of patients and the higher degree of specificity with which treatment is performed on the brain structures involved in psychiatric disease.” and “The psychiatric diagnoses where the best results are to be found are obsessive compulsive disorder, chronic anxiety states and major depression.”
Bilateral cingulotomy is a technique used to treat obsessive-compulsive disorder, bipolar disorder and major depression. This technique is reserved for those who have not been “cured” by psychiatric drugs or electro-shock therapy.
This operation is performed by a gamma knife (focusing beams of radiation) to the target area, where a ½” lesion is formed on a part of the brain that connects the limbic system (involved with emotions) and the frontal lobes, which are involved in reasoning, impulse control and judgment.
Another type of modern psycho-surgery, known as anterior capsulotomy, is also used on OCD cases. According to the website decoded science, the surgery “interrupts the circuitry in one area of the brain, and causes metabolic decreases in several brain regions.”
When researchers performed a follow up study in 2008 on 25 patients who had anterior capsulotomy, 10 years post surgery over half of them had experienced adverse side effects.
A Chilling definition of Psychosurgery
This definition of psychosurgery comes from the free medical dictionary online:
“Surgical interruption of certain nerve pathways in the brain, performed to treat selected cases of chronic unremitting anxiety, agitation, or obsessional neuroses.
“Modern psychotherapeutic drugs have replaced psychosurgery in most cases. Psychosurgery is performed when the condition is severe and when alternative treatments, such as psychotherapy, drugs, and electroshock, have proved ineffective.
“The procedure may be a limited prefrontal lobotomy, in which connecting fibers in the frontal region are cut, or a modified bifrontal tractotomy, in which nerve tracts of the brainstem are severed. Light general anesthesia is given.
“Postoperative nursing care includes observation for signs of leakage of cerebrospinal fluid.
“A marked alteration of personality is unavoidable. Various cognitive and affective functions also are affected, depending on the location of the induced lesion, the extent of destruction of nerve tissue, and the age, sex, and condition of the patient.” (italics are mine)
Permanent damage by psychiatrists’ brain operations may not be in the public awareness like the horrific operations of the last century were, but this “treatment” is by no means gone.
SOURCES:
http://projects.wsj.com/lobotomyfiles/?ch=two
http://www.ncbi.nlm.nih.gov/pubmed/12717678
http://bipolar.about.com/od/treatment/a/bilcingulotomy.htm
http://www.decodedscience.com/surgery-for-ocd-bilateral-anterior-capsulotomy/30972/2
http://medical-dictionary.thefreedictionary.com/psychosurgery

← Facebook Envy Depression and Nomophobia Heading to DSM V Warning: Your Pediatrician is now Encouraged to Look for Mental Health Disorders in Your Child →